Trask is a 24 year old Arabian gelding, standing 15 hands and weighing about 950 lbs. we have owned since he was 15.

When we purchased him, his former owners gave a list of things he “Did not do”. These included:

The usual “Join Up” process that involves moving a horse in a round pen for  awhile, until it begins to get weary of being pushed and gives signs of giving over leadership by lowering it’s head, movings it’s lips and then following quietly behind, takes about 20 to 30 minutes typically for a new horse. For Trask, it took over 2 hours, with Nancy and I taking turns driving him and for months there after, when we repeated the process, he still resisted more than any horse I have ever known. 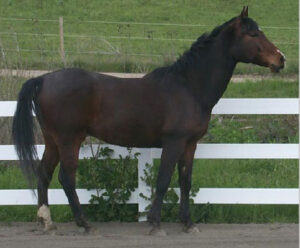 Suffice to say, Trask is one independent guy. ;>.

It actually wasn’t too difficult to fix most of the issues the previous owners had with him and after a short time, only the ear problem remained. To this day we have to be careful when bridling him. We assume someone “eared” him when he was young and he just can’t completely let go of that fear.

After a time, Trask became a remarkable mount. He is responsive to the lightest touch of the leg or movement in the saddle or of the hands. That tirelessness he had shown in our early round pen sessions, became a trademark of this thug of a gelding.

What a sweetheart eh?

Another trait he is known for is being a grouch. He ran the pasture, with threat and bite and most other horses learned to give him room, especially at feeding time. He would even lay his ears back when you came to feed him and will to this day snake his head around when you tighten the cinch. Now don’t get me wrong, in spite of all his posturing, He has never intentionally harmed a human. With two legged folk, he is all bluff and bluster, but completely harmless.

For years he was my most successful example of my warhorse training process. I learned a great deal working with him and he is still one of my favorite horses ever.

In the last few years Trask has become a harder and harder horse to keep weight on. Even with blanketing in the winter and seriously supplementing he was still too thin this Summer, so a few months ago we put him in a pasture with grass standing several inches high, where he has made a very nice recovery. He now looks much the Trask of old, muscular, fit and healthy. 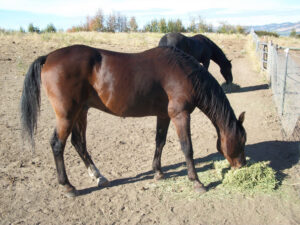 Not bad for an old guy.

For years now we have made the claim that Trask was so well trained that he could be left in a pasture for months, be saddled with no warm up, and he would ride exactly the same as he had the last time he had been used. This week I put this claim to the test.

A few days ago I took Fonna and Mercedes over to spend some time in the pasture and brought him home for a week to give him a chance to work a bit.

I took him out of the trailer, cleaned him off and tossed a saddle on him. We worked together for a couple hours and he, in fact, was much the same horse he has been for years. Light, responsive, agile and strong. However, he is 24 now. He is not quite as strong or surefooted as he was in his prime, though still a formidable warhorse.

Each Spring we think it is time to retire the old guy and every time him ends up standing at the gate, not allowing us to get another horse out until we work with him, only to find he is still sound and ready to work.

Trask, the horse we love to hate. I hope we get to keep love/hating him for years to come.