When I first began Orion’s training, at about 8 months of age, I came up with a rough plan as to how that training would progress as he grew.

Earn his trust and respect with regular round pen work. Goal was to have him easy to handle and respectful, willing to stand for the vet or the farrier, to be groomed and handled as well as willing to load into a trailer. The only snag in my plan was that from the very beginning Orion was essentially fearless, at least when it came to things like lunge whips or lead ropes, so the round pen method I had used previously would not work at all with him. I was forced to rethink my training methods completely and so I did. In those first few month working with him I changed more in the way I approached training than I had in the several year previous. 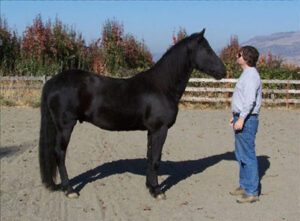 Continue working in the round pen, but also add short line work, with the goal of starting his collection and flexibility training in preparation for carrying a rider under saddle. Here too I would begin desensitizing  him to weapons and targets as well as general trail elements. In this, his fearless nature served him well and he was casually doing in-hand trail courses like they were nothing.  Obviously we continued to reinforce his foundation training from year one while we watched him grow in size, strength and mental ability. 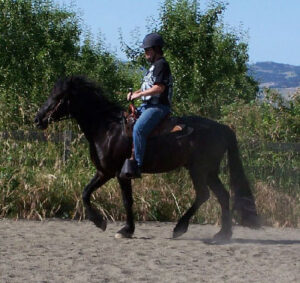 Introduction to the saddle and rider, advance his training as a proper mount. I had actually put the saddle on him late in his second year and even stepped up on to his back for a few minutes and he handled it like he had been expecting it from day one, but obviously he was not physically mature enough to start riding just yet. So it was a early in his third year that I began light riding on him, after the vet had given his okay that Orion’s joints were ready. From the very beginning he never so much as bucked and by May of that year we took him to his first SCA equestrian event. There I authorized on him in all the standard elements of medieval gaming used in that group, even though Orion had never seen most of the before. We spent the remainder of that year practicing those elements for short periods being careful to not ask too much of him physically as he was still growing. 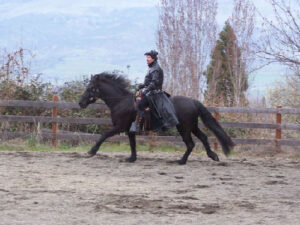 Orion begins competition in earnest but we still don’t push him to hard. During this year he shows a real aptitude and even an enthusiasm for the work.

It was really becoming apparent they his breeding had produced the exact warhorse we were looking for.

He excels at everything asked of him but is not yet as responsive as we need him to be nor as energetic, but this is as it should be. 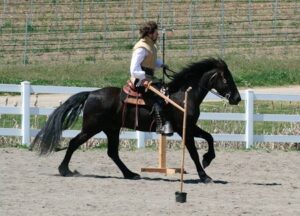 Take him to as many competitions as possible and begin building his strength and muscle him up. During this year we compete at four events in challenge courses.  He distinguishes himself with three first place finishes and one second and his name becomes known widely in the Medieval Horse community when other riders get a chance at using him for the games as well.  His Facebook page fills with fans, observers and riders both. 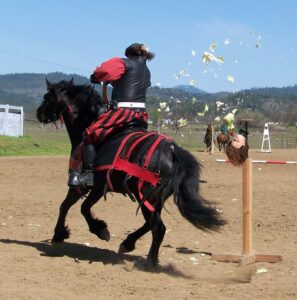 Continue in competition and physical conditioning, but now we start working on speed and responsiveness. Unfortunately our financial situation is such that we can’t afford to haul to most of the events we wanted to compete in. So we have to be happy with the one local event in April, then putting on shows for the Rogue Renaissance Fantasy Faire and a county fair so far. We hope to make at least one more competition before the season is over. On the plus side, Orion is far more responsive and MUCH faster than last year, so should we manage to actually make it to an event I am guess he will do amazing things.

So all in all, the training plan we originally came up with has run its course just about as planned. If anything, we have been able to move faster than expected. I look forward to seeing how the rest of this year turns out.