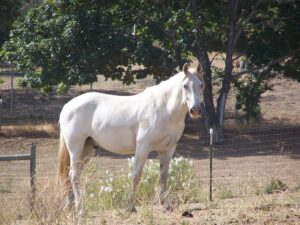 Jupiter is a 7 year old Lipizzaner gelding. He stands 15 hands and I would estimate him to weigh about 1200 lbs. He has been well handled from an early age and is very social.

He loaded into my trailer with very little hesitation, having not been in one since he was a baby and traveled the 5 hours back home without complaint.

Upon arrival, he stepped off very calmly into a dark pasture at a new location with several horses he had never seen before. He looked around, then quietly followed me into the round pen.

I hung around a while to make sure he was settling in well, and watched him interact with Zephyr and Mercedes over the bars of the round pen. This interaction was curiosity and interest but nothing more exciting than that, so I left everyone happy and quiet and went home. 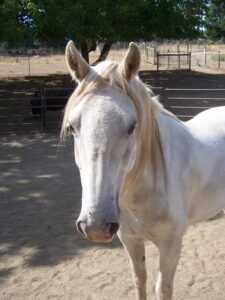 I returned in the morning, bright and early, to find things pretty much exactly as I had left them. I put food out for everyone and went ahead and let Jupiter out of the round pen and into the pasture with Zephyr and Mercedes. The other horses were in the adjacent pasture.

Everyone seemed more interested in their food than each other. There was just about no interaction until the food got low, then the usual wandering around looking to see who might have have more left began. ;>

Now this is where I would expect things get interesting, but nope, they just start sharing until all the grass was gone. I know, pretty boring. ;>

When the eating was all done, I took him down to the tie rack for some grooming and just spending some time with him away from the other horses.  He stood quietly through the whole thing, just getting a little edgy when I sprayed him with fly spray.  Again, pretty boring.

Next came our first round pen session.  Jupiter is a big mover, a very big mover. There is a lot of forward in him, with great suspension. He didn’t want to canter for me, but he is a little heavy right now and certainly not in the best condition, so I suspect he will be more active when we get him in better shape. ;> Be that as it may, he moved out at the trot just fine, turned when I asked him to and joined up eventually, though that was more because he is a nice guy than him accepting me at herd leader. That will take another session to accomplish I think. I didn’t want to push him too hard the first day.

When all was done I put him back out in the pasture with Orion.

So to sum up, Jupiter is very self-possessed and confident. He has a good foundation in ground manners. His movement, collection and flexibility are all at a great level for beginning his training. ‘The only thing I see needing to do by way of preparation is to get his weight down a bit, condition up a little and his feet trimmed.

I am looking forward to seeing what we can accomplish together.